I’ve been having trouble sleeping past 4 a.m. This has been ongoing the past nine months or so. This morning I opened my laptop in bed to write something a friend mentioned yesterday, but just couldn’t remember what it was. My brain then started wandering and I somehow thought it would be a good idea to write detailed descriptions about three different events from when I was a late teen…and found myself running from police.

Keep in mind I was young and dumb and full of ___ when all this went down and that plenty of kids get into plenty of trouble before blossoming into mature, respectful and admirable adults. 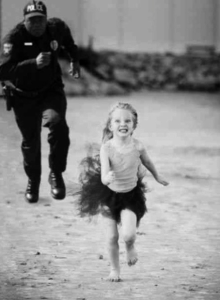 Event 1 – The cops chased a handful of us down Garden Road in Poway on Halloween night. I forget what we were doing but I doubt it was all that bad. Cops in the Garden Road neighborhood were known for hassling high schoolers for silly reasons. Anyway, we started running and I remember taking my shoes off to run faster. Now I wear running shoes on the regular because they’re most supportive, but back then I wore skate shoes and probably too loose because that’s how they looked coolest. So we’re running down the street, shoes in hands and two cops on foot maybe 50 feet behind us. Dan turned right down a side street but we didn’t follow. He was probably going to make his way home. The cops stayed with us. We eventually turned left, and were moving fast so by this time they were trailing about 100 feet behind. We decided to try and lose them by crossing through a few backyards toward the main road on the opposite side. We bolted up someone’s front lawn. I took the fence to the right. Jared took the fence to the left. I jumped over and dashed toward the back of the yard. Jared jumped over and landed on a doberman. Literally landed on top of a huge black dog. I heard the dog squeal, then snarl, then heard Jared cussing and scrambling to get away. The homeowner must have been nearby because all the commotion brought him outside in a heartbeat. Or more like five seconds, so in this case 50 heartbeats. And since the cops would have been out front by now they were quick to respond. So were we. I was already scaling the next fence when I heard the cops talking to the homeowner and the homeowner trying to calm his dog. After a couple more fences my feet touched sidewalk. Jared popped out onto the sidewalk behind me and jogged to catch up.  We walked casually toward the convenience store on the corner. The cops must have stayed with the homeowner to do detective work. Nothing ever came of it.

Event 2 – We got caught smoking near the loading dock of the Poway Industrial Park in San Diego. The guy was in a big security truck, not a squad car, so we weren’t sure how bad the situation actually could have become, but since he tried so hard to catch us we imagined he meant business. He came up from behind our parked car and flashed his lights. Brandon panicked, booked it around the building in his ’87 Honda Prelude (Lowered + 15” rims = ghetto fabulous. Brandon thought he was thuggish ruggish.) and screeched a left onto Industrial Park Blvd. Matt rode shotgun, and since it was his first time getting high in a couple years he was probably extra paranoid. I glanced back and forth from front windshield to rear window, scanning for hope among any obstacles ahead and checking on our pursuer’s progress behind. As we turned right on Pomerado Rd he was almost on top of us, but Brandon lived nearby and knew these backroads well and if he could pull off this next move…We were going roughly 50 mph…he hit a hard right turn up a one-way street in the wrong direction…pulled the e-brake…slid sideways to our left…hopped up the curb and over the six-foot-wide median…and gunned it up the one-way residential street. As soon as I could upright myself in the backseat I looked back and saw our pursuer’s vehicle coming to a stop shortly past the turn and realized we now had a moment to escape. We turned left, right, left, then another right, parked a half-block from Brandon’s house and ran inside. I forget the lie Brandon told his mom as to why we were so short of breath. Nothing ever came of this chase either, but Brandon had to replace his rear left wheel and Matt may have had to throw out his drawers.

Event 3 – Then there was the time we were chased through a flea market in Tijuana. That was probably the scariest chase because one of the last places you want to end up is in a Tijuana jail cell. Eric, Ian and I had spent a long night in North County San Diego and the next day Ian wanted to drive to Mexico to buy some pharmaceuticals. He knew that many of the “pharmacists” in Tijuana would help him consolidate two bottles of pills into one container to minimize shaking so he could sneak them back across the boarder undetected. Eric and I were hungover from a big night and decided to tag along, with a shared goal of street tacos and one-dollar Coronas. It was probably 90 degrees out and all we wanted was tacos and cold beer. But our taxi driver wanted to make money off of Ian, so we rode along his “amigo’s store” where he could get the bargain Tyler demanded. He went inside and returned a few minutes later, empty handed but supposedly with “more amigos close by.” He tried two more spots with no luck and by this time we were much further into the heart of Tijuana than we wanted to be. It was an unfamiliar area and with less tourists around us we felt less safe. But the driver was set on making some dough off more than just a ride, and he assured us he would succeed in finding Ian’s pills if we kept following him. Screw that. We opted out and told him we weren’t paying for the one-way ride to nowhere. He’d taken us so far and hadn’t really went anywhere, but his meter kept ticking. So we walked away to find another cab. Turned out that was not the right move. The guy knew just about everyone around, including the three police officers just across the street. They all gave chase, so we picked up the pace. The Mexican police, our pissed off cabbie, and two random guys who must have known the cabbie were now in pursuit. We ran like bats outta hell…hungover, lost, nervous, and pissed at both Ian for trying so hard to score drugs and at ourselves for letting him try so hard. It was like a scene from a movie. We were flying through the streets on our feet, avoiding street vendors, children, chickens, three-legged dogs and pull carts. My most distinctive memory: the tapestries and all the rugs, sheets and towels that hung from the shack roofs as I blast through the flea market scared for my life. I found ways to pierce through the thick, woven tapestries without damage but the thinner sheets and colorful beach towels… I more like whipped through those, and can recall looking over my shoulder to see them falling to the ground as leaves fall from trees. That’s my last memory of that day. I think we eventually ducked into another cab, but can’t remember exactly how we escaped. I don’t even remember tacos or beer. Only the memory of all those flea market leaves falling to the ground.

Please don’t ask for more stories because I don’t have much to offer. I really didn’t run from cops too often. And the friends I chose weren’t bad people. We had mostly good intentions, just were bored and searching for adventure without much regard for our surroundings. I mean, there were a few more times, but nothing really worth writing about. Like…

That time the party broke out of Scott’s place in Mission Beach when cops showed up and Mark got caught by his foot while jumping out the second-story window. He fell ribs-first into the fence below, which seemed a bit aggressive of the officer, then was tossed in the back of the paddy wagon with a fighting couple and wound up making out with the guy’s girlfriend. A few partiers were written up for Minor in Possession but the rest of us were fine and the next day Mark had a cool story to tell.

That time the cop passed me driving with my head out the window (waking myself up), turned around and flipped on his lights. I was close to work and thought if I could make it into the warehouse parking lot I might avoid whatever nonsense he wanted to discuss. I even ran a stop sign at one point when he was briefly out of sight. But he found me sitting low in the very last parking spot behind work. Luckily I only received a warning. “Keep your head in the window.” When I exited my car, Cop Killer by Ice Cube was playing on the loudspeakers. Thanks, Brian.

And then there was the time my brother and fought two guys at a college party in Chico, CA. I was sticking up for my little brother (who is 6” taller than me) and we ended up on the better side of that fight. My brother had a finger in a brace, so when the cops stopped us on our way out the door we said something like, “How could we fight? His finger’s broken. But there’s a fight going on inside right now.” The cops went inside and we high-tailed it down the street.

And then there was that other time. Oh, and that time. But that’s about it. We were generally advocates of the legal system and definitely respectful of authorities. And nowadays when I run, leaves actually do fall around me, not just metaphorically.

This little smile gets me every time
Greeting the horses is part of our morning routine. 007 is especially friendly. @babyisstoked #shakennotstirred #lifeisbetteronthefarm
Uncle Jon came to visit! We loved having him around the past week. Beach days, island exploration, beers, housework, and most importantly, time with Makai!
Les bubbles
Driving up my street like whoa
Mak ‘n Roo